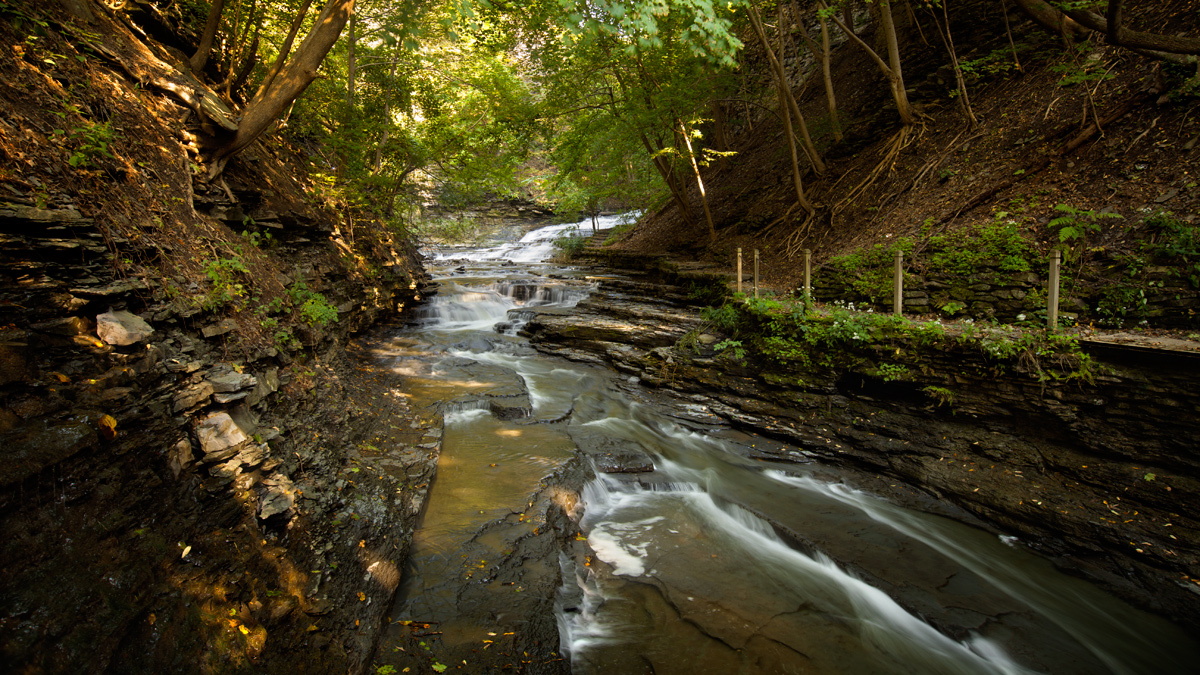 "What's stunning about [Ithaca], though, is the sheer volume and quality of social innovation, pragmatic activism, spiritual seeking, open debate, and homemade and imported cultural fun that goes on here--in an atmosphere of robust local pride." --Jon Spayde Utne Reader, 6/97

Ithaca is a unique town, nestled in the hills overlooking Cayuga Lake in the Finger Lakes region of New York state. The gorgeous scenery and abundant natural beauty are complemented by a vigorous and diverse intellectual and social mix.

There is a little of everything in Ithaca, whether you're looking for outstanding ethnic cooking, art house movies, or cross-country ski trails. Once you've been here for a short while it will come as no surprise to find that many of the area's residents came here to school and decided to make Ithaca a permanent home.

Some Ithaca highlights are mentioned below, but there is much more going on here than a few short paragraphs can describe.

Dining in Ithaca - Ithaca has more restaurants per capita than NYC and a wide range of options to choose from.

Cinemapolis /  Cornell Cinema - Three area cinemas devoted to showcasing quality new and classic films. These theaters show art movies, cult classics, foreign films, and the best of the independents - in short, any great movie that might be missed by mega-movie complexes.

Downtown Ithaca - Downtown Ithaca is the place to enjoy the best that upstate New York has to offer. Surrounded by waterfalls, lakes, and forests, nowhere else in the region can you find such a wide variety of shops, restaurants, theaters, and historic architecture.

Farmers' Market - Hosted in a large, airy, waterfront pavilion, the Ithaca Farmer’s Market has something for everyone. With cuisine ranging from Sri Lankan to Korean to the standard breakfast burrito, you can snack as you peruse the local vendors and merchants, pick up a fresh bouquet of flowers, or just sit by the water and listen to the live musicians.

Herbert F. Johnson Museum of Art - The Johnson Museum boasts a permanent collection of more than 35,000 pieces and is regarded among the nation's best university galleries. The museum is especially well known for its Asian art and prints. Notable names in the galleries include Rembrandt, Matisse, Manet, Alberto Giacommetti, James McNeill Whistler and Alfred Stieglitz, among others.

Moosewood Restaurant - The nationally recognized vegetarian restaurant, made famous by the cookbook "Sundays at Moosewood."

Taughannock Falls - A glorious waterfall, cascading 215 feet down through natural rock walls that rise in places to 400 feet. The surrounding state park includes miles of trails, tent and trailer sites, showers, cabins, and a swimming beach. In the winter, the sledding slope opens for old-fashioned thrills.

Wine Tours - The Finger Lakes region is well-known in the East for wine production. The Cayuga Wine Trail stops at estate wineries located on routes 89N and 96N. Close to Cornell, the Six Mile Creek Vineyard is the only winery situated inside the limits of Ithaca.